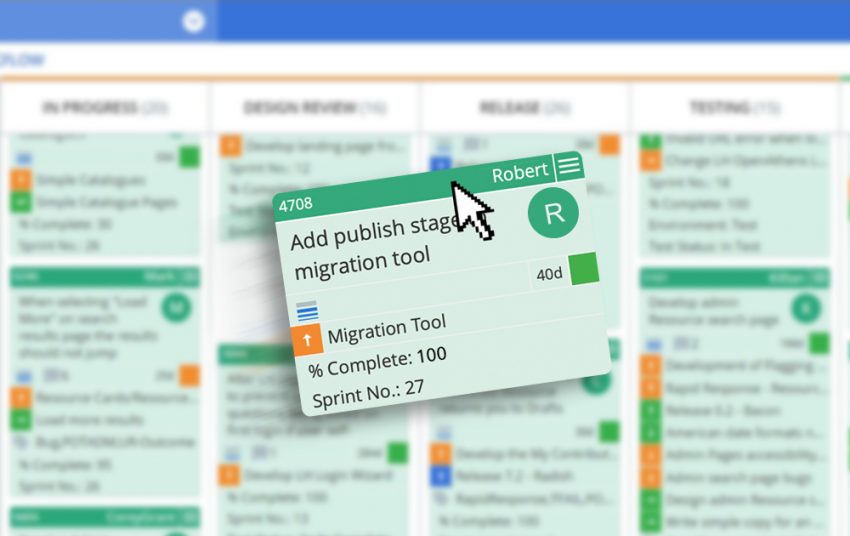 The Learning Hub is a platform designed with the user at the heart of its development.  In this blog the Learning Hub’s Delivery Manager, Richard Brunton, talks us through the journey of a feature suggestion received from users to changes being implemented and released onto the platform.

The Learning Hub is in its Beta phase, this means it is still in development with functionality and features being added all the time.  So, we encourage users to share their feedback with us, flag issues and make suggestions for future features on the platform.

Working in this way ensures we are genuinely considering what the users want and need at all stages of the process.  Requirements can change, so working on feedback from users and including user research at different points in the process ensures we’re always focused.  It’s really encouraging to see developers considering users while they’re coding, and we often hear developers saying things like: “I’m not sure the users would like that.”  There has definitely been a positive behaviour change during the Learning Hub development process with members of the team responding positively to opportunities to have a say in changing things and working with colleagues in other teams.

Each piece of feedback received from users is allocated a card that is added to the project management board. Each piece of work in the Learning Hub project also has its own card to allow its progress to be tracked.  Based on the subject matter of the card it will be allocated to one or more of the following team members: business analysis, user research, design and development.

Once the cards have been approved – meaning there is agreement the feature suggestion or feedback is valid and will benefit the users of the platform – they are moved to the backlog columns on the project management tool until they are assigned to a sprint.

Cards are allocated to a sprint, which is a two-week period of work, in the sprint planning meetings.  They are then moved to the sprint backlog, assigned a sprint number and added to our sprint tracker.  Members of the development team assign themselves to the card as they become available in the sprint, based on their current capacity, completion of other tasks, technical capability, the card’s priority, and their preference – this also encourages the wider team to have a more detailed interest in the project.  The work then begins with details of all updates recorded on the cards as well as the team sharing their progress with the other team members on the daily meetings – the stand-ups.

If the card’s status is “being worked on” this can relate to any aspect of the process – planning, business analysis, user research, design, development, testing.

User research can happen at many phases throughout planning, business analysis, design and even development. It also takes several formats depending on where it is and what’s required.

When a card progresses from development and is completed, it will move to the release column on the project management tool.  Cards in the release column are reviewed by the product owner, technical architect and delivery manager and assigned to a specific release, which gains its own card on the release board.  Once a release card is filled it will be moved to the “continuous integration” area for developers to merge their code and test together. As the linked development cards on the main board are moved an automatic notification is sent to the relevant channel on Microsoft Teams with details on the release, this informs all the other members of the service team, including Support.  Once the continuous integration test is complete the release card is moved to the testing column.  Automatically, the linked development cards on the main board are moved and an automatic notification to the relevant Microsoft Teams channels are posted with details on the release.

The test team is now able to begin testing against the notes on the release card.  It is at this point that regression testing will also be carried out.  If “fails” are flagged these will have a card raised against the main board card and added into the testing swim lane; this swim lane shows where there is a fault in testing and that it has interdependencies to other pieces of work.  Once all failure cards have successfully passed testing, the main card can move to the done column and when all failure cards reach the done column, the code is released to live.  The release card is moved to live and an automatic notification to the relevant Microsoft Teams channel is posted.  At the end of the sprint there will be a Retrospective to discuss what went well and didn’t go well and inform changes for the next sprint.

There’s always more we can do; we could examine the cards in even more detail from a technical perspective.  We could perhaps break the cards down further; so each task isn’t too big.

The service team and the tool structure means we’re delivering quickly, which has surprised me as the Agile methodology we’re working to means we’re checking, changing and iterating the requirements a lot!  But the structure means the cards move quickly through the process and we’re making smaller changes and releasing more often to enable Learning Hub users to benefit from more features and functionality.

We’ll continue to ensure the user is at the centre of all our developments. So if you’d like to share some feedback please get in touch because we take it on board and, we take your comments on a long journey to ensure we’re making the right changes to improve the experience on the Learning Hub.